Note: The following was originally posted on the old LordBlognStuff page on Sunday, May 9, 2010.  You may read the original article here.

The most important thing about a game is possibly the first hour or two.  It’s like the opening chapter of a book, or the establishing shots of a movie.  It sets the mood for the entire rest of the game, and oftentimes is a good indicator of how much fun you’re going to have.  Sometimes a game with a horrible opening can turn out to be good (I’m looking at you Aquaria,) but those games are the exception rather than the rule.  Thus, this first hour will be crucial to Final Fantasy VIII’s success.

The pre-title sequence is a bunch of still images that right now have no meaning as they do nothing to set up the characters, or anything.  I don’t blame them, as they are just an excuse to show off the names of the game developers.  Let’s take a look at the title screen. 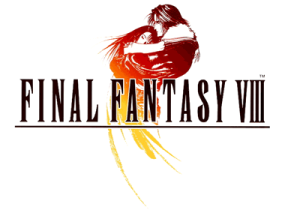 So, what do we have here?  Looks like some dude… hugging some girl… this is gonna be a romance game, isn’t it?  Awww man, it is, I can just tell.  This is why there were so many guys hating on this game, isn’t it?

For some reason Continue is highlighted even though I haven’t started.  And New Game is in all-caps.  Weird.  I try to Continue but it won’t let me.  How surprising.  I start a new game.

Already I have a gripe that I hope won’t pan out: the game seems to use the Triangle button as the “cancel” button instead of the Square like every other Playstation game I’ve ever played.  Square, breaking tradition is good in some ways, but you’re just being confusing right now.  I will hope this trend does not hold true for the actual game.

The opening cutscene is a flash of water, flowers and a whole lot of feathers.  Everything starts out in media res, so I have no idea who these people are at first.  There’s a girl in a field, and she grabs a flower, and it turns into a feather.  Then the scene cuts to the main character, who I know is named Squall Leonheart.  He’s a feminine guy and he has a huge sword.  He is fighting another feminine guy (but this one is blonde) who also has a huge sword.  There are some rapid cuts to an evil-looking woman and then more swordfighting.  Squall gets cut in the face and is suddenly in the field with the girl.  Everything is confusing.  You can watch the video for yourself here if you feel like being baffled.

Let’s establish Squall’s appearance before we go any further.  An image is worth 993 words, so here is the first one I found on google: 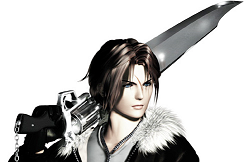 Is that a sword that is also a gun?  Hot diggity, now we’re getting somewhere.  I hope to have many good times with my sword-gun that hopefully will shoot other swords.  Or maybe shurikens and lightning.

Now the game actually starts.  Squall is lying on a hospital bed and some guy named Dr. Kadowaki asks, “How are you feeling?"  I can choose from "Okay, I guess.” or “My forehead hurts."  If the opening movie has anything to do with this, I just got a sword in the face.  I’m gonna be a big guy who takes swords in the face like it’s nothing, so I choose to say I’m perfectly fine.  The doctor says, ”……Ok.“  Now I get to name Squall.  I name him Squall after briefly considering the name I Say.

I learn that the blonde guy with the sword is Seifer.  I remember this guy from Kingdom Hearts.  He was like fifteen years old.  Squall must be at least twenty-three.  Did I get whupped by a kid before the game started?  Aw, maaaaan.  Squall postures for the doctor but gets laughed at.  It’s better to be alive and lame than cool and dead is the opinion here.

Quistis is introduced.  Why don’t these people have normal names?  She’s my "instructor."  Kinky.  She looks like a librarian.  She says "lol you lost” and makes Squall get up out of the hospital bed.  I can actually control my character now.  I get to walk halfway down the hallway before I lose control again.  Whee!

Camera pulls waaaaaaaay out to establish the scene.  We’re in a school of some sort, which is in some crazy cone-shaped futuristic pyramid.  A far cry from the swords-and-sorcery of Final Fantasy III, but then, the telephone should’ve tipped me off.  Cut to a classroom, where the instructor starts teaching class.  It seems the field exam for SeeD candidates is beginning later this afternoon.  Luckily Squall is allowed to participate, having neither failed the written test nor deciding to opt out like a wuss.  I bet this will be my tutorial.  Until then, I have “free time."  Seifer gets told off.  His pride is grievously wounded, I’m sure.

The teacher says I can’t participate until I go to the Fire Cavern.  I turn on the "Study Panel” before going.  Looks like the tutorial is right here.  Wonderful.  I read several walls of text.  It seems magic in this game is weaker than conventional weapons, and the setting I’m in is called Garden.  It seems to be a rather ordinary school, for a world where monsters and magic are ordinary.  All graduates are between 15-19.  Squall must just look older than he is.  It looks like SeeD is some prestigious fighting mercenary squad.  Just the life for me!  It’s hard to tell what is fluff and what is foreshadowing.  I make note of the “report any suspicious insects” message.

Having waded my way through the labyrinthine explanatory segments, I feel prepared to take on anything, bear or lizard.  Or fire-bear or fire-lizard, if I’m going to the Fire Cavern.  I head out and a girl, yelling about being late like the White Rabbit, slams into me.  Ow.  She says this place is bigger than the last Garden she was at (there is more than one?) and asks me to tour her around so she won’t get lost in the future.  I agree because maybe she will give me something good.  Another guy gives me some cards.  It’s time to duel?

The tour of the school is a clever tutorial in disguise to acquaint me with the location of everything.  The headmaster of Garden is named Cid.  Why is it always Cid?  I finally can save my game and book it to the Front Gate where Quistis is waiting for me to go to the Fire Cavern.  I’ve been playing for how long now and the game is just starting.  Quistis takes the time to explain something I already read about in the tutorial.  Derp.  I click through as fast as possible but it’s still really slow.

On my way to the fire cavern, I get into my first fight!  Two wasp things and a giant caterpillar!  They’re not too tough and I show them what-for.  Now I know why I was on the lookout for weird bugs.  I enter the fire cavern proper.  I can choose how long to spend in the cavern.  20 minutes seems reasonable for the first dungeon. Some bats attack me and I steal magic from them in the form of Thunder and Scan.  Now I am a winner!  A few more battles, a few more magics stolen, and I level up.  Snazzy.  I learn that monsters come from the moon, and that they fall off down to earth regularly.  Weird.

It’s boss time!  The boss is Ifrit.  He looks like he should: fiery and demony.  I use the ice magics and the ice-aligned Shiva summon on him, but Shiva makes him mad and he goes berserk, talking about how Shiva is unfair or something.  No matter, I use Shiva again and again to make short work of him.  He says, “Not bad for a human."  Jerk.  Then he says he’ll join me.  If you can’t beat ‘em….  The dungeon took about 11 minutes, well under the 20 minute limit. Here’s what Ifrit looks like: 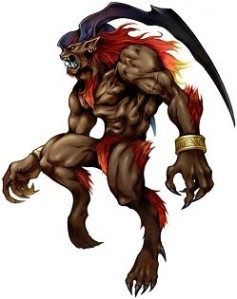 I return to Garden and am told to change into my uniform.  Forget that, uniforms suck!  I find a save point and quit.

The game hasn’t done much to distinguish itself so far from the millions of other Japanese RPGs.  I like the ability to Draw magic from enemies instead of the traditional MP bar, which reminds me of the Crystal Chronicles’ Magicite system, even though this game predates that series by years.  The battle system is an interesting cross between traditional turn-based and Chrono Trigger.  I haven’t been turned off yet, so next time I’ll see what this SeeD test is all about.  I’m going to try to end all of the entries with the quote I find the most ridiculous, funny, or over-the-top in this highly stilted script.  Here’s the first, though in the future I won’t label them explicitly like this.

Note: The following was originally posted on the old LordBlognStuff page on Saturday, May 8, 2010.  You may read the original article here.

Today, having finally procured a Memory Stick which is capable of holding more than a single gigabyte of data, I decided to take the classic PS1 title Final Fantasy VII for a spin.  I’ve never played this “classic” but I’ve certainly heard about it, and really, what gamer hasn’t?  It regularly vies with The Legend of Zelda: Ocarina of Time for the title of “Best Game Ever.”  I personally didn’t play Ocarina until about ten years after its 1997 release, following the logic put forward by one well-known webcomic. I do this regularly – I didn’t play the fantastic Max Payne until this year.  My experience with the Final Fantasy franchise proper (the numbered titles, not the spin-offs such as Tactics or Crystal Chronicles) is limited at best.  I’ve only played Final Fantasy III (not VI, I mean the Japanese III) and hated it.  I regularly cite it as the worst game I’ve ever played.  However, millions of people have purchased this game, and supposedly the series picked up after the third entry.  We will see, I thought.