Note: The following was originally posted on the old LordBlognStuff page on Wednesday, May 19, 2010.  You may read the original article here.

Today I ascend the electric tower into the heavens, all in the name of a passing grade.

The inside of the tower is dark, metallic and gloomy.  I’m in the entryway and the only way to go is up a lift.  What horrors might await when I reach the top?

Always the gentleman, Zell puts the safety of the team first

Sadly, the rebels do not resemble the actual Biggs or Wedge

Anyway, Biggs tells Wedge to stuff it because he’s too busy and then whines about his tools being old and crappy, and about how he has to do all the work.  Wedge leaves to check things out, and finishes the repairs just as Our Heroes arrive on the scene.  Everything begins to shake.  The tower powers up.  The music gets dramatic as energy pulses through everything.  A giant cannon raises out of the tower.  Oh no, the terrorists actually got WMDs!  No, wait, it’s just a satellite dish.  It seems the rebel terrorist group was just out to get free HD television service without having to pay for it, the fiends.

This egregious assault on our valuable capitalist system can not stand.  Stealing television is beyond the pall for Squall, and Our Heroes are about to attack when Seifer shows up.  He wants some of the glory too!  Now that he’s here, it’s time for a BOSS FIGHT.

Biggs realizes the threat that Zell poses to his life and decides to take him out first, but Zell shrugs off the attacks.  After one round, Wedge shows up.  Biggs chews him out for allowing enemies to get near and Wedge gets his feelings hurt.

Would’ve made my life easier at least.

Sadly, the rebel scum obviously never went through basic training because they constantly bicker, which probably explains why they fight so poorly.  I blitz them with GF after GF, and it looks like an easy win when….

A giant winged bat-thing comes out of nowhere and blows away Biggs and Wedge with some sort of tornado!  Now I have to fight this thing, and it does not look like it wants to make me a delicious spaghetti dinner.

It’s name is Elvoret, but the game didn’t tell me that, I had to look it up.  I draw some of the new Double magic from him.  I don’t know what it does, but it’s passive.  Oh wait, it lets me cast magic twice in one round.  That’s sort of useful! Elvoret can do 150+ damage to multiple party members at once and that is NO FUN.  I have Zell (who I used double on) heal everybody right quick.  GF summon after GF summon is cast.  Ice doesn’t seem to do much damage, and electricity and fire are both roughly the same.   Either he has no elemental weakness or I can’t exploit it.  Bummer.  In retaliation he unleashes Storm Breath which does massive damage to everybody.  Lucky I can use double-cure.  Also, I can double-cast double, so now everybody has this nifty effect running.  Abusable!  And I said it was only sort of useful?

I remember I have scan magic.  I use it and see he’s only got 534 hit points left and is apparently a fly, not a bat or a dragon.  I’ve never seen a fly like this, but then again, it is a giant bug I GUESS.  Anyway this means there’s no way he can survive another GF summon series from all of my party members so I do that.  Fly swatted!  Like all flies, he explodes in a massive fireball when he dies, then disintegrates.   I gain 0 experience.  Wut.

Selfie now can complete her life’s goal: talk to Seifer.  New orders are asked to withdraw and assemble at the shore.  Seifer doesn’t want to but remember: order to withdraw overrules everything.  He runs off ahead of us.

Hey wait, he didn’t help us fight that bug at all!

Biggs gets up once I leave and uses a control pad to send something after us.  Then he collapses. 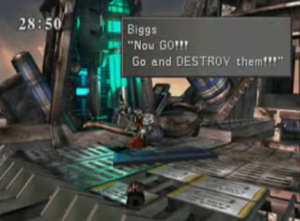 And I would’ve gotten away with it too, if it wasn’t for those meddling kids!

I have a literal half-hour to walk back to the beach.  No sweat, right?  Wrong!  Right outside of the tower, I’m attacked by a GIANT ENEMY CRAB. 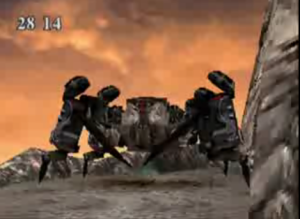 Hit its weak point for… y’know.

X-Awhatever starts to go into repair mode – 0%.  Maybe it won’t attack while fixing itself…  60%….  this is fast, which is bad.  I summon and attack, but he hits 80%.  Then it gets up.  Squall muses, “Huh, is it repairing itself?”  Brilliant deduction, sherlock.  If only the game itself hadn’t told you that five minutes ago.

After a few more cycles of this I realize that repair mode heals the thing to full and there’s no way I can kill it.  Run away!  Run away!

The thing pursues me down the hill.  I have to engage it again.  Run away!  Ruuuuuuun!  I used most of my time limit trying to kill it at the top of the hill, so things get tight.  The summon sequences take far too long to watch, and that’s bad juju.

At this point I wonder what happens if I were to have levelgrind..ed… levelground?  anyway, leveled to the point where I could kill this thing outright.  Maybe next time. 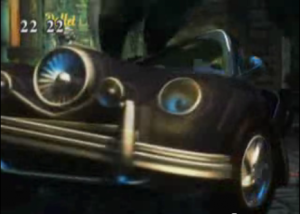 As Mega Ultra Spider approaches the beach, there seems to be no way to stuop it until…. it gets stuck in the sand.  For a second, anyway.  Then Quistis shows up with a giant futuristic version of a minigun and blows the robot spider’s face off.  Wish I had one of those.  Our heroes escape onto the boat and out into open waters.

I will digress from the game proper at this minute to comment that I really like how this game has handled the transition between gameplay and cutscenes.  Most games choose one of two options:

FFVIII seamlessly transitions between gameplay sequences and FMV movies, so that there’s no break in the action.  I approve of this for several reasons, but mostly because of that buzzword many developers throw about called “immersion.”  Things like fades break the pacing of a game’s story, reminding us that it’s only a game, and we are playing the game.  Contrariwise, using only in-game models (especially in older games) doesn’t allow the cutscenes to be as dynamic as an FMV, because  in-game models are restricted to a small number of possible actions, though as technology advances this is less and less true.  The seamless transition seems to be the obvious choice, and I don’t know why more games don’t utilize it.

Anyway, back to Our Heroes.

We arrive safely back at the home port.  Seifer is greeted by Thing 1 and Thing 2 like loyal puppies.  He struts off with his cronies in tow, and Quistis congratulates us and says we’re free until sundown.  Then, Seifer drives off with our Crazy Taxi!  Looks like we’re hoofin’ it home. 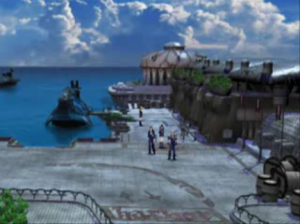 Time to explore the town for a Save Point.  I come across the first of what I expect to be many of the RPG staple: an Inn.  They call them hotels but like Link, I take none of that.  It is an inn.

I find Zell’s house, and his mother is home.  Now normally I would make a joke about his mother, but seeing as Ma Dincht produced the single most heroic, masculine and powerful godling of a child ever to walk the face of this earth, I can say nothing more about Zell’s mom.  She is surprised that Zell has friends.  Ow!

I finally get out of the city, save, and quit.  That’s enough for now.  Maybe next time, I’ll finish the opening sequence of the game! 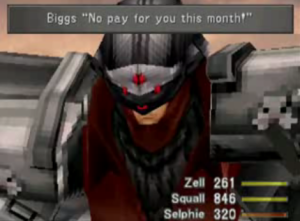 No pay for you this month!