Note: The following was originally posted on the old LordBlognStuff page on Monday, September 6, 2010.  You may read the original article here.

Today I drew this girl.  Is she smiling or frowning?  I can’t decide.  The feet were by far the most difficult part, probably taking as long as the entire rest of the picture and I still am completely unsatisfied with them.  On the other hand, I’m pretty pleased with the not-quite-profile on the body.  ¾ views are maybe the hardest things I have drawing.  Maybe. 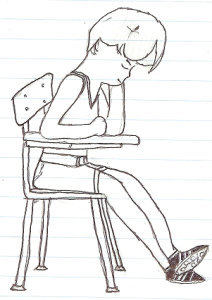 On the original picture her hair is shaded in with pencil but the scanner didn’t pick that up and I didn’t want to use pen because pen does not shade so imagine her hair is dark okay?  Okay.  I had to reline the entire thing the first time because even in pen the scanner didn’t think it was dark enough so resizing it caused augh blurry.

Tomorrow is the release of Kingdom Hearts Birth By Sleep and I full expect my life to suffer a hit in social activity and work as a result because I can not resist the sweet siren call of Mickey Mouse.

When I was five, I was in a car with my dad and he mentioned that there was this Batman TV show in America about a man who dressed up in a costume and fought crime. The only bat I ever knew was a cricket bat, so what I thought he looked like was rather odd, based on that. – Neil Gaimen