Note: The following was originally posted on the old LordBlognStuff page on Thursday, June 8, 2010.  You may read the original article here.

Our journey resumes in Squall’s room.  Selphie says I need to get changed, because there’s a totally rad kegger happening soon.  Never one to turn down a chance to get smashed, Squall dons his SeeD uniform, which makes him look like he’s a general from Victorian military general.

Now that I’m dressed to impress, I can attend the party.  The scene cuts to Squall standing in a hall, being served a snifter of champagne (no joke, I can tell by the shape of the glass and the colour of the beverage – Garden has lax drinking rules I guess.)  Zell saunters up and with a “Yo!  S’up!” shows his gangster roots.  Taking his leave, Zell is momentarily stopped by Selphie, who wants him to join the Garden Festival committee.  Zell knows that he wants none of it an smoothtalks his way out of it.  Selphie tries to use her wiles on Squall to make him join, and he agrees.  Overjoyed, Selphie bounces out.

The FMV cutscene kicks in.  Across the room, Squall sees a woman.  She is Asian in appearance, the first minority we’ve seen.  She sways over to him and introduces herself and her dress that barely reaches the top of her thigh.

She isn’t very subtle, is she?

Clearly all this girl cares about is getting some from Squall.  She asks him to dance, but Squall just takes another sip of champagne.  “Let me guess… You’ll only dance with someone you like,” she declares, placing one hand on her hip.  “OK then.  Look into my eyes…” Watch out Squall!  She’ll hypnotize you! 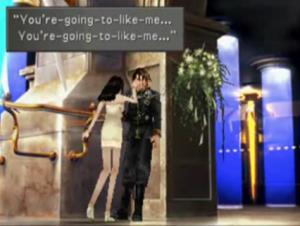 Squall lays it on the line: “I can’t dance.”  Mystery chick tells Squall that he’ll be fine, and completely misses the hint.  Then she makes like any anime girl would and literally drags Squall out onto the dancefloor.  For some reason he is unable to outmuscle her.

There’s quite a long dance scene here in which Squall shows that he wasn’t lying: he can’t dance, nearly knocking over another couple and almost tripping himself.  Eventually he gets the hang of it, though.  You can watch the dance cutscene here.

After the dance, the mysterious girl totally ditches Squall, leaving him in the middle of the dance floor.  Squall makes his way out to the balcony, where Quistis shows up and “compliments” his dancing.  No, really.  She totally means it when she says he was “perfect.”  A moment of weird sexual tension between teacher and student follows, but it peters off.  Clearly, Quistis and Squall are not the fated couple of this game.  The reason she came out here is to give me orders: she and her are to go to the ‘secret area’.  Wo-hoh, maybe they are the couple after all.  “It’s where students secretly meet up and talk after curfew,” she explains.  It’s inside of the training center.  Looks like this is the end of dirty dancing for the night.  Squall doesn’t want to go reprimand a bunch of kids for breaking curfew, but Quistis laughs and tells him to get changed.

Outside the tutorial Teach mentions a T-Rexasaurus Rex of some sort and explains how I can defeat it quickly with Status-J.  Oh boy, another tutorial!  I thought the game was starting proper but I guess not.  Supposedly the dino is weak to sleep.   I fumble through a dozen menus to figure out how to use sleep effectively until I realize I can’t Junction it yet.  Wonderful..  Stupid JRPGs. 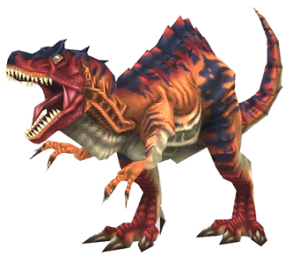 It seems he’s super-weak against ice, but I wish that the GF summoning sequences didn’t take so long, or could be skipped.  Anyway the standard summon blitz works the standard wonders against this guy and I wonder if combat will ever be interesting, ever.  It drops a Dino Bone.  Hooray.

I reach a save point.  T-Rexopolis Rexsquire has me tired out, so I finish up for the day.  I wonder if the save points will ever stop telling me that they’re save points every time I touch one.  I get it, okay?  I can save using you!